About the Map of the London Underground

Harry Beck created the original schematic Tube map in 1931. The Docklands Light Railway, London Overground, the Elizabeth line, Tramlink, the London Cable Car, and Thameslink are just a few of the additional public transportation systems that have been added to the network since that time. 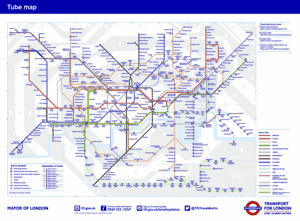 History of The London Underground Map

As a schematic diagram, it displays the relative positions of the stations, lines, connective relationships between the stations, and fare zones rather than their actual geographic locations. The fundamental design ideas have been widely used in other similar maps throughout the world, as well as in maps of various transport networks and even conceptual drawings.

The official Transport for London website offers a frequently updated version of the map. In 2006, the Tube map was chosen as one of the top 10 design icons in Britain, along with the Concorde, Mini, Supermarine Spitfire, K2 telephone box, World Wide Web, and AEC Routemaster bus. Since 2004, Art on the Underground has commissioned artists to design covers for the pocket Tube map.

There were only route charts for the individual firms because the early transportation system in London was run by several distinct enterprises. The maps were just a line overlay on a conventional city map; they weren't often schematic. The services of the companies were not integrated, and there was no advertising cooperation.

The Evening News London "Tube Map," a compact atlas, was ordered by the newspaper in 1907. It was the first map to utilise a different colour for each line and to display all of the lines equally weighted against one another.

The Underground Electric Railways Company of London (UERL) and four other underground train firms collaborated on the publication of another early united map in 1908, using the "Underground" name as a shared advertising element. Eight routes were shown on the map, four of which were run by the URL and one by each of the other four companies:

A geographical map had limitations because it couldn't show enough detail in the densely populated centre of the map without omitting the District and Metropolitan lines' extremities.

As a result, a complete network diagram wasn't given. Truncation was an issue that persisted for about 50 years. The Metropolitan line beyond Rickmansworth did not appear until 1938, and the eastern end of the District line did not appear until the mid-1950s, even though all of the western branches of the District and Piccadilly lines were first included in 1933 with Harry Beck's first proper Tube map.

The route map was still being created and published until 1920, when, for the first time, the geographic backdrop information was removed from a map created by MacDonald Gill. As a result, the design was more flexible in how lines and stations might be placed. Although the routes took on a more stylised appearance, the layout mostly remained geographical. The last geographic map before Beck's diagrammatic map was introduced was the 1932 edition.

If you would like professional, London Promotional Staff or Sampling Staff for your upcoming activity in a London Underground Station, then get in touch with us today. You can call or email our local London office at the details below.

Additionally, you can also check out a bit more about this office, as well as recent reviews on our Varii Promotional Staff (London) Google Business Profile.

Looking for a great place to promote in London? Read about the most popular London Stations.